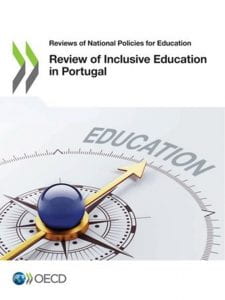 March 2022 saw the publication by the OECD of a review of national education policy in Portugal. The report, which was produced as part of OECD’s ‘Strength through Diversity’ project, has important implications for future reforms in the United Kingdom.

The most striking thing that emerges from the OECD review is the way that, over the last twenty years or so, Portuguese policy makers have used inclusion as a guiding principle for educational reform. Crucially, this is not seen as a discrete policy – a task to be allocated to certain individuals or groups. Rather, inclusion is regarded as a principle that must inform all educational policies, not least those concerned with the curriculum, accountability, funding and teacher education. In this sense, it is seen as being everybody’s responsibility.

Since 2008, Portugal has had in place laws envisioning the provision of education for all students, without exception, in their local mainstream school. This legislation led to special schools being transformed into resource centres for inclusion, tasked with supporting their former students, who are now placed in mainstream schools.

Further legislation in 2018 provided a framework that sees inclusive education as a process under which the education system must be reformed so that it can adapt to the needs of all students. With this agenda as the focus, the Government has given priority to the development of policies that guarantee equal access to public education in ways that are intended to promote educational success and equal opportunities.

Importantly, the Portuguese legislation has moved away from a view that it is necessary to categorise students in order to intervene. Rather, it supports the idea that all children and young people can achieve a profile of competencies and skills at the end of their compulsory education career, even if they follow different learning paths. It therefore emphasises flexible curricular models, systematic monitoring of the effectiveness of interventions, and an ongoing dialogue between teachers and parents/caregivers.

This approach is in stark contrast to that taken in England, where recent years have led to an expansion of labels that situate problems of educational progress within the child. We have seen, for example, the emergence of the term ‘premium children’ alongside the many other labels that are a legacy of traditional special education thinking.

This emphasis on labelling has led to a massive expansion in the number of learners placed in separate provision of various forms. Meanwhile, the number of pupils with an education, health and care plan has risen considerably, putting additional pressures on local authority budgets that are already stretched. And, of course, there has been a worrying increase in those who are out of school altogether.

A key feature of the Portuguese education system is the emphasis placed on collaboration. This is facilitated by a well-established pattern of schools working in local clusters – a particular strength in relation to the promotion of inclusive practices and forms of organisation that support the introduction of these ways of working. Indeed, many other countries are seeking to establish similar arrangements, building on research suggesting that collaboration between schools has an enormous potential for fostering their capacity to respond to student diversity.

A further area of strength in Portugal is the active involvement of community representatives in policy formulation within the school clusters, including the appointment of school directors. These arrangements provide a sound basis for engaging community partners to support the promotion of inclusion and equity within a local cluster.

I was privileged to be a member of the team that carried out the review in Portugal. A striking feature of our discussions with stakeholders in different parts of the country was the widespread awareness and acceptance of the principles upon which the national education policies are based.

Particularly impressive was the way that children and young people talked about their pride at being students in a school that is inclusive. Many also talked of the value they gained from being involved with such a diverse range of classmates.

At the same time, there is a high level of awareness at all levels of the education system of the dangers associated with using labels in referring to potentially vulnerable groups of students. Frequent mention was also made of the political history of the country that has influenced the concern to see education as a basis for fostering democracy.

As the Portuguese education system moved forward in relation to inclusion over the last two decades, the country has also seen impressive developments in terms of equity. Indeed, it is one of the few countries with a positive trajectory of improvement in all of the subjects assessed by OECD’s Programme for International Student Assessment (PISA). In addition, the rate of early leavers from education has reduced significantly, although there are significant variations between regions.

It seems, then, that seeing inclusion as a principle for educational reform can provide a pathway to excellence. This points to the urgent need for a new direction in education policies across the United Kingdom.

So, as Labour formulates its policies for education reform, I suggest that it is now time to take an inclusive turn. Moving in this radically new direction will, of course, take time, as is evident in the story of Portugal, where there are, of course, still more challenges to be addressed. It will also require that the resources and expertise that exist within alternative provision should be redirected towards the development of schools where children and young people learn how to learn together and live together.

Mel Ainscow CBE is Emeritus Professor of Education at the University of Manchester, Professor of Education at the University of Glasgow, and Adjunct Professor at Queensland University of Technology. He is a long-term consultant to UNESCO, working on international efforts to promote equity and inclusion globally. He has recently completed collaborative research projects with networks of schools in Australia, England, Portugal and Spain. Examples of his writing can be found in: ‘Struggles for equity in education: The selected works of Mel Ainscow’, published in the Routledge World Library of Educationalists series.

One thought on “Time to take an inclusive turn: Mel Ainscow.”

Scroll Up
Skip to toolbar